Many thanks to everyone who turned up to spend money at Patzy and Lawrence Dalby’s yard sale on Sunday 27th August. £80 was raised for the Royal Cornwall Hospital Treliske on a gloriously sunny morning.

If you missed the sale, don’t worry, Lawrence is doing a London to Paris cycle ride in September to raise further funds for this excellent cause and his sponsor sheet is still in the Post Office – so you still have time to get in there and add your name to the list! 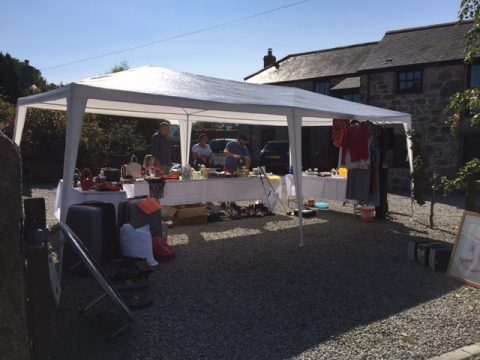 St Day Youth AFC has now been officially told that its request for funding to purchase a minibus has been accepted on the Tesco Bags of Help scheme. This means that between 01st September and 31st October, 2017, you will be asked to vote for one of three schemes every time you are given a token after shopping in Tesco. Please put your token in the St Day Youth AFC box and help the people who work so hard to make the club such a great success. The winners will receive £4,000, second £2,000 and third £1,000 and, whilst £1,000 would be very useful, you can help the club to win and receive the maximum £4,000 towards its objective of buying a minibus.

This minibus will not only mean that the youngsters can travel together to their away games but the club is also intending to make the minibus available to groups and organisations in St Day when it is not being used by the football club. Sounds like win win to us so please get voting!!

At our Parish Council meeting on 10 July Peter Ledingham of Geothermal Energy Ltd gave a short introduction to this project which is due to run until mid 2020. Two wells will be drilled, starting in early 2018, to a maximum depth of 4.5k (about 3 miles). The drilling will probably last from 6 to 8 months and will continue 24 hours per day. Mr Ledingham was at pains to stress that this will not be noisy, the noise levels will be very carefully monitored, and that low limits, 45 decibels at night and 65 during the day, are conditions of the planning permission. The intention is that, by the end of the project in mid 2020, a one megawatt power station will have been built to create electricity – enough to power up to 1,500 homes.
The site being used is on the United Downs Industrial Site but there will be some impact on St Day in that there will be some additional traffic along the B3298 from Scorrier. Mr Ledingham stressed that this increase will be minimal and that it will only really be noticed on two occasions – when the drilling rig is being delivered to and removed from the site. These two movements will be very carefully planned.

Obviously, whilst there are obvious potential benefits from this project, there are also many concerns. It is really important that residents take the trouble to find out what is involved and this you can do by going to one of the planned public information events and asking questions. The first one is planned for Tuesday 25th July in the Mills Hall, Carharrack, between 3 and 8pm. It is a drop-in event so go when you are free.

One final important point – this is not a fracking project.

Surely everyone must have noticed the vacuum cleaner which was dumped in Fore Street outside the Town Clock garden wall at the end of June? Because one lazy person couldn’t be bothered to drive the one and a half miles to the household refuse site on United Downs (at a cost of around 15p) Cornwall Council will now have to be contacted to come out and remove it with two men and a van. How much is that going to cost? Much, much more than 15p that’s for sure! Who will pay? We will, and that’s also for sure!

PLEASE if you see anyone dumping rubbish in public places let the Parish Council know. It is costing Cornwall Council, and that means you and me, thousands of pounds each year to clear up after these lazy people.

AND PLEASE if you are a fly tipper, stop being selfish and lazy and take your rubbish to the household refuse site as, fortunately, most other people do.

We have developed this website in order to keep all our residents up to date on Parish Council activities, including the publication of all our documents in accordance with the Government’s Transparency Code guidelines.

We also aim to make this site interactive and we encourage all of our parishioners to get involved and forward us any information you may want to be included or shared on the website.

Find out more or adjust your settings.