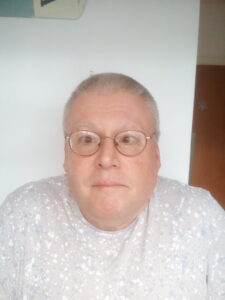 Darrell worked for his local Authority in Cheshire for 33 years, as a telephonist on the main switch for a district housing office – this included the Leisure & Amenities Department. At this time, he was also employed by the National Charity Scope, due to his disability of Cerebral Palsy.

During this time he became involved in a National Charity called Toc H. He served at a local level and regional level becoming a central Councillor. He then went on to serve the Charity Nationally on the Executive, while still delivering all other levels and his Local Authority role.

During this time, he travelled the Spanish Islands including Crete and Cyprus. His last explore extensively being Egypt including Cario.

He resigned from his local authority in 2016.

Darrell, with his family moved to St Day in 2017 after discovering and visiting Cornwall over many years.

In his adversity, Darrell has always strived to look out for others and will bring great experience and diversity to the Parish Council.